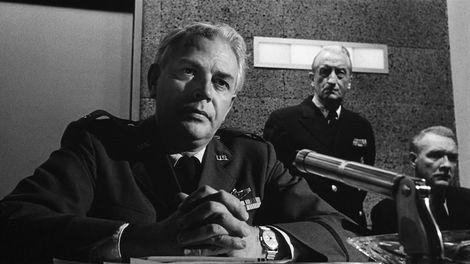 Historically, military organizations have had to find occasions for ethical renewal. This arguably happened in the 17th century during what had become known as the “Military Revolution.” in the nineteenth century with written international rules on armed conflict, and following World War II and Nuremberg, with the advent of UN Forces and peacekeeping operations. (See my Soldiers and Civilization: How the Profession of Arms Thought and Fought the Modern World into Existence (Annapolis: USNI Press, 2017.) In a recent New York Times article (“Rebooting the Ethical Soldier,” NYT 16 July), retired Air Force Major General Robert H. Latiff argues that the rise of new warfare technologies calls for such a renewal, lest killing become too easy and automatic.

The other night, while my wife was at book club, I ran a recording of the movie Fail-Safe that was shown on TCM a few nights ago. The film has worn well. The acting by the likes of Henry Fonda, Walter Matthau, and a very young Larry Hagman is excellent, as are the direction by Sidney Lumet and a script that follows the novel by Eugene Burdick and Harvey Wheeler closely.   Its themes of brinksmanship and over-reliance on technology have renewed relevance in the era of AI and other technologies.

For me, the character of Brigadier General “Blackie” Black, played by distinguished actor Dan O’Herlihy, is one of the most unforgettable parts of the film. His may not be the star role (that likely goes to Fonda) but the film begins and ends with him, and it is his sensibility and thoughts that give the film its main gravitas. Fail-Safe begins with his dream of a bull being flayed in an arena while he watches helpless and horrified from the stands. He wakes in his New York apartment and wakes his sleeping wife, telling her that he is worried about the work he is doing, and even considering resigning from the service, in part to make his recurring dream go away.

At a meeting later that day with the new Defense Secretary and a roomful of other generals and officials, Black is a dissenting voice. He’s obviously worried about the normalizing of nuclear war, arguing against the glib abstractions of the defense intellectual played by Matthau and the rather unimaginative pragmatism of some of the senior generals.  Suddenly, the electronic board on the wall of the room depicts an American bomber squadron that has erroneously proceeded beyond its Fail-Safe point and is now on its way to bomb Moscow.   This has been caused by a failure of the technology that was not caught in time by the human chain of command. Many efforts to prevent this attack, some finally undertaken in uneasy cooperation with the Russians, are tried without success, and the president, played by Fonda, is forced to make a tragic decision. (I’ll try not to give the ending away, in case anyone, maybe younger readers, is unfamiliar with the plot.) Black, an old schoolmate of the president’s, is the man selected to carry out his order, after which Black commits suicide.

Black embodies some of the traits of the ideal (or idealized) officer-as-strategist I’ve outlined in recent writings.  It is interesting that he is a one-star general among the four-stars and their equivalents in the Washington War Room. This suggests that he is closer  to the realities of armed conflict of which some of the higher-ups have lost sight. He still flies, and in fact it is his ability as a flier that earns him his final, tragic mission. A picture of a WWII flight crew in his bedroom indicates that he is a combat veteran. Black’s understanding of the the nature of war, and his imaginative ability to grasp the awfulness of nuclear war are terrible burdens. Matthau’s Professor Groteschele says the he is a “political scientist, not a poet.” He appears to have insulated himself from the consequences of nuclear war, and reduced it to a game of numbers and political abstractions, but he has also fallen for the dark fascination of mass destruction. Another character says, “No one is responsible,” but Black has assumed the responsibility  for war on himself. He bears responsibility even for a conflict he has done his professional, personal best to avoid.

In this, Black is embracing an old-fashioned code of honor and personal responsibility that distinguishes him from the “organization men” the technocrats and bureaucrats. He is also showing the way for an updated professional code, one as concerned with the preservation of peace as with the successful application of armed force.

Fail-Safe  is a great old movie. The 1962 novel and the 2000 film version with Harvey Keitel as General Black aren’t bad either. It may be time to press them into service for the training of cadets and officers.  They could make fine texts for discussion, of which I have likely only scratched the surface.  A soul as well as a brain is required for strategic thought, and advanced technology isn’t the only contemporary challenge. The strategic challenges of our time are surely exacerbated by a chief executive of uncertain judgment, limited understanding, and doubtful soul.