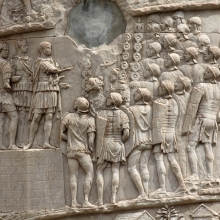 In the Teaching Guide, I ask “What were the Roman approaches to education and to religion? Can we learn from these?”  This is another second-order question in that more research could be done on Roman educational and religious practices.  It may be a third-order question (a puzzler) in that the influence of education and of religion on a society and on the military is a nearly bottomless subject that no one can claim to have mapped out definitively. A discussion of this question could lead to another on how students view the importance of education and religion (or the lack thereof) in their own lives. Like the question on the experience of Greek battle that I posed a few days ago, this one could serve as a “distant mirror” (to use Barbara Tuchman’s titular phrase) reflecting on our own lives.

But before we get to that, we should reflect on the Romans themselves, their approach to education and to religion and how the army both influenced and was influenced by them.  The Romans inherited from Aristotle and the Greeks a system of rhetorical education that involved the memorization and recitation of certain texts, and also such arts as imitatio, the imitation of the styles of authors. Roman writers like Cicero and Quintilian wrote extensively about the mean and ends of education.  Through rhetoric, Roman youths were instructed in history, they gained an appreciation for and a facility with language, and they were also indoctrinated in the values of the Republic and Empire. It is fair to say that the works of such Roman writers as Virgil, Plutarch and Tacitus constituted a poetics of military virtue, which the Romans had also inherited from the Greeks through Homer, the Greek dramatists and historians. For Roman boys of the middle and upper classes, their education was intended to prepare them for positions of civic and military leadership.  Many Romans held civic and military posts alternatingly in the course of lifetime.

The picture above shows the Emperor Trajan addressing some soldiers.  Most modern officers are frankly amateurs at the art of public speaking, and many tend to avoid opportunities to speak in public and are often tongue-tied when they try, but Trajan and his fellow Roman officers had been prepared by their education to face such an occasion with confidence and to speak effectively as the occasion demanded: whether to exhort, instruct, rebuke, or inspire. They had practiced this from boyhood. In it’s complete sense, rhetoric was also a moral art, eschewing unworthy appeals and raising standards of conduct.

Modern education might take a page from the Roman book.  The system of education by rhetoric survived the western empire by a thousand years, and its influence can still be felt, but it may be time for a more deliberate revival.  Memorization adorns the mind. Recital embodies the words of the past and present. The practice of rhetoric not only prepares the student to speak, but it involves a clarification of values, defining what she is willing to literally “stand up for.”

How well have our own educations prepared us to lead lives of service, to know ourselves and strive to be better?  This is for each to consider.  Many of us would say that our most important education was self-tutelage, but the schoolhouse is a valuable place too, sometimes as a place to resist, to experience doubt, to make us uncomfortable enough to think of changing ourselves.

I’ll save my comments on Roman religion for my next post, and then maybe a little skit on the Second Punic War.