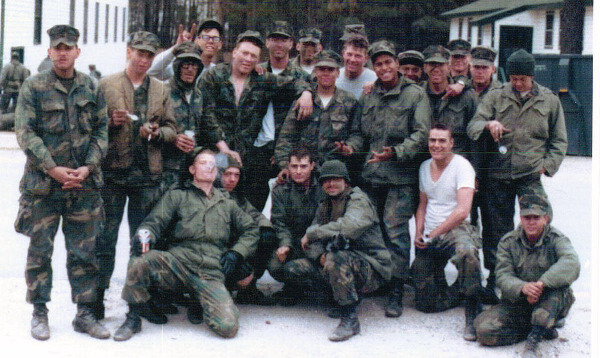 My first assignment out of the Marine Corps Basic School and Infantry Officers Course was with Company G, 2nd Battalion, 8th Marines (or Golf 2/8 as Marines would say). Shortly after I reported aboard in 1981, the battalion deployed to the Mediterranean.  It looked for a time that we would land in Beirut, but it didn’t happen, and we went back to North Carolina after an uneventful six months of cruising, liberty call, and a few training anchorages. When 2/8 went back to the Med in 1982, however, we did land in Beirut. Someday I’ll write about that experience, but today I will fast forward to our return. By the time we got back, I was nearing the end of my tour with 2/8 at Camp Geiger/Lejeune.  I spent a few months as CO of Headquarters Company, 8th Marines, wrapping up with a “Solid Shield” Exercise and departing for Marine Corps Recruit Depot, Parris Island in April of `83.

2/8 deployed to the Med again a few months after I left.  They made history this time, landing in Grenada enroute to Lebanon, and getting involved in significant combat operations when they got back to Beirut.  In the course of this, four Marines I had known were killed in action. With Memorial Day coming up, I’d like to write about them.  Even on Memorial Day, the one day we set aside to remember, the dead are too often forgotten. This is my effort to preserve some of the memory, for myself as much as for anyone else who reads this, of four good Marines I knew.

The first to die was was Major John Macroglou.  Maj Macroglou had been the Deputy for Camp Affairs (DCA) at Camp Geiger when I was CO of the Headquarters Company.  Our jobs put us together, and he was kind of senior officer who was a friend of junior officers. He was later reassigned to 1/8 and deployed to Beirut .  On 23 October a truck loaded with explosives crashed into the building that the battalion was using as a command post.  220 Marines, 18 sailors and 3 soldiers were killed, John Macroglou senior among them.

Next to go was Captain John Giguere.  Captain Giguere was the Forward Air Controller (FAC) for G 2/8 when I was with the company.  One Christmas we were on air alert, and Capt Giguere and his wife invited all of the single lieutenants in G Co. over to their house on Christmas Day.  Just days after the Beirut bombing, 2/8 invaded Grenada, and by then Capt Giguere was back to flying his Cobra.  The other Cobra in his section (his “wingman”) was shot down on the island. Capt Giguere and his co-pilot continued to suppress enemy ground fire and direct rescue efforts for the downed ship, even continuing to make strafing runs at the ground after they had run out of ammo, in order to draw off fire from the rescue aircraft.  Capt Giguere’s ship was shot down. It went into the sea, killing both him and his co-pilot 1st Lieutenant Jeffrey Scharver. One of the Marines in the other Cobra was rescued and survived. John Giguere received the Silver Star posthumously.

Last were Sergeant Manuel Cox and Corporal David Daugherty. Shortly after the bombing, 2/8 relieved 1/8 in Lebanon.  On a day in December units of 2/8 were engaging the enemy. When the shooting started, Cox, Daugherty, and some other Marines ran to the roof of the building they were in to return fire.  A rocket hit the roof, and Cox, Daugherty, and several other Marines were killed.  Cpl Daugherty was a big, happy guy. I’ve looked up some pictures of him and the other 3, and he almost always has a smile. That’s how I remember him.  Sgt Cox was a serious career Marine with a wife and son.  I wish I’d made the effort to get to know them a bit better, but the atmosphere of the Marine Corps generally doesn’t encourage that between officer and enlisted. Anyway, I won’t forget them, and on Memorial Day I’ll make a special effort to hold them in my heart.